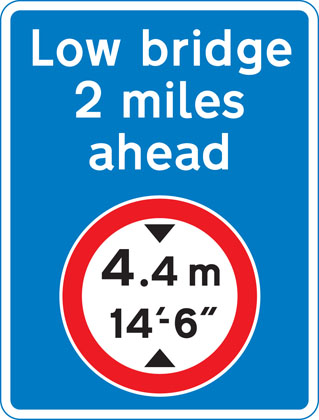 This month saw an all-too-familiar tragedy unfold in Ely, Cambridgeshire. Despite great efforts having been taken to daub the local low-hanging railway crossing in black-and-yellow warning signs, an overly-optimistic HGV driver still managed to crash into it.

Cambridgeshire Live reports that, in the wake of the mishap, a Network Rail official pointed to the organisation’s ‘wise up, size up’ campaign, which encourages drivers to know how tall their vehicles are. According to Network Rail, it costs around thirteen grand to clean up a smash-up of this sort, which adds up to £23 million for the taxpayer over the course of a year. This particular bridge has seen more than a hundred collisions in the last decade, making it a veritable hotspot.

How low do bridges get, anyway?
You might think that this bridge, at 9’, is a little bit of a squeeze – but this bridge is far from the lowest in the country. Head over to Newport in Wales and you’ll find the 5’6’’ Bishton Road Railway Bridge. Even lower than that is the one in Coppermill Lane in Walthamstow, London, at just 5’ flat. You can see both bridges documented here by a helpful bridge-enthusiast.

Out-of-the-way curiosities like this are not going to trouble the average haulier, since they’re obviously too small for a van to fit through. It’s the middling-sized bridges that pose the real problem, as they lure you into a false sense of confidence – that is, until you hear a terrible crunch and your journey comes to an embarrassing halt.

Of course, this isn’t something that our driver in Cambridgeshire can complain about – warnings don’t come any more glaring than the one written across the side of the Ely particular bridge!

How to avoid driving into a low bridge
So what are we to learn from all of this? Firstly, and most obviously, you’ll need to know exactly how tall your vehicle is. Lots of you might have at this point concluded that this is something that only lorry drivers will ever need to think about. But you’d be wrong! Don’t assume that just because you’re driving a van, you’ll be alright; as we’ve seen, there are much lower bridges in the UK. The height of an LWB Transit is just north of 8 feet, which is going to make it too tall to pass beneath a fair few bridges.

Another sensible precaution is to plan your route more effectively. Any satnav worth its salt is going to include information on where the low bridges are, so be sure that you pay attention to those warnings!

You might think that you’ve passed under a million bridges, and that this sort of thing will never happen to you. But a blasé approach to low bridges is surely going to catch up with you one day – and it’ll irritate the rest of us who find the roads ensnared with the excess traffic as your mess is cleared up!